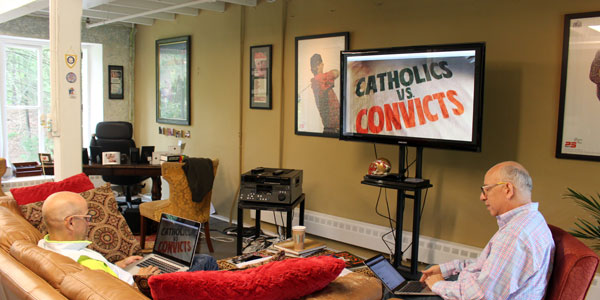 Robert Abbott is a six-time Emmy Award-winning producer and director with 30+ years of experience in the sports and entertainment industry. He just completed a short film: Destiny’s Democracy on President Lyndon Johnson for the LBJ School of Public Affairs at the University of Texas. Abbott’s film Port of Destiny: Peace on Colombian President Juan Manuel Santos can be found on Amazon Prime. Abbott has also produced and directed two films in ESPN’s critically acclaimed 30 for 30 series, The Last Days of Knight and Catholics vs Convicts.

Abbott is a graduate of Florida State University and lives in Avon, CT with his wife Jennifer and their three sons.

Artist Statement
I am a television producer and documentary filmmaker. I have produced, directed, and or created award-winning films and TV series for CNN, ESPN, ESPNZ, ESPN Classic, ABC, and Sport South Network. I am involved in every artistic and creative aspect of the production process. Everything from the look and feel of the cinematography, to the graphic design of the show open and title credits, to the choices of music in the film or TV show. I would love to share my work and have visitors watch my documentary films and TV series and enjoy the stories I have told over the years.

For Email Newsletters you can trust.